Art has always been an important part of our life at Trinity. With so many talented artists in our community, we find it important to display their God given talents and gifts. We invite you to stop by any time our building is open to see our wonderful displays. 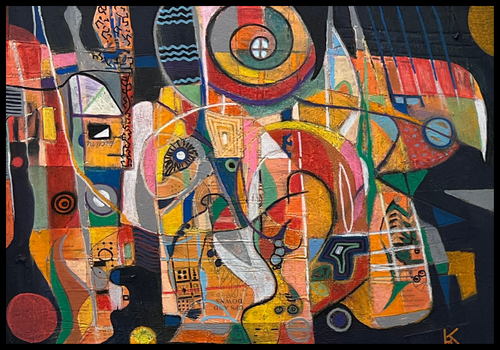 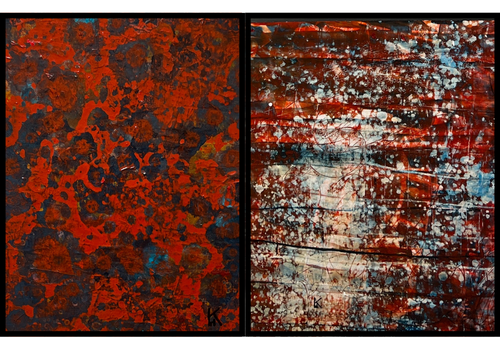 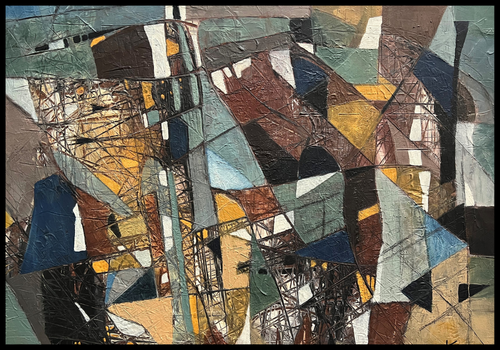 Like many artists, Thom Kulp has always engaged in some sort of creative endeavor.  His journey began with crayons and pencils as a child and progressed to water colors, oils and acrylics later in life.  Along the way there were other explorations and forays into collage, collagraphy, encaustic, block printing, and mandala drawing.  Some of his latest pieces are venturing into the three dimensional realm, but have not as of yet become true sculptures.  They are more akin to bas reliefs.

Thom studied painting and drawing at Harrisburg Area Community College with the colorist painter, Edith Socolow who influenced him in the realm of abstract art.  Color as subject matter was a revelation to him and his current work is still highly influenced by this.  After studying Experimental Mixed Media Linda McCloskey for several years at the Art Association of Harrisburg, he took over that class and taught it for several years there as well as at the York Art Association in York, PA.  In addition to studying with Linda, Thom has taken classed with Julie Yontz-Rupp, Phyllis Disher-Fredericks and Ron Schloyer.  He has conducted various workshops in Experimental Mixed Media, Collagraphic Printing, Mandala Making, and Painting in the style of Jackson Pollock.  Currently he teaches students in his home studio located in Linglestown, PA.  He has participated in many local shows and won numerous awards for his art.

I paint in a non-objective manner, because I feel this gives me the greatest leeway to express my love of color, shape, form, texture and line and to express my immediate emotional state at the time of creation.  The great variety of acrylic compatible media opens up vast worlds of self-discovery and experimentation.  Any given painting of mine may contain, in no special order, multiple layers of acrylic paint, acrylic ink, fluid acrylics, colored chalk, charcoal, colored pencil, Caran D’Ache crayons, gloss medium, and collage elements of paper.

Paintings develop through these various media applied to paper or canvas with a variety of tools used to manipulate the surface.  I use brushes, brayers, squeegees, and various implements such as jar lids, combs, and found objects as stampings agents to leave unique marks on the surface.  A spritz of alcohol instantly imparts a unique texture to a wet surface.  What may appear prominently one hour during the painting session, disappears the next, perhaps ultimately to be reborn as another color or texture in a later stage of the process.  Everything remains in a state of flux. This uneasy state of incompleteness drives the creative process forward to resolution.

Each painting is a journey.  It is never clear to me where the journey will lead.  I take cues from the painting as to what my next step should be.  It becomes an exciting revelation, an epiphany of unexpected juxtapositions, unplanned results that dazzle and beguile.