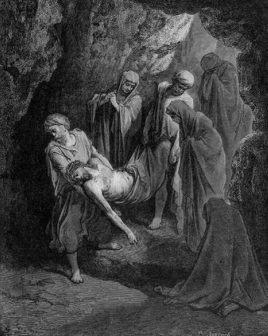 Leader: We adore you, O Christ, and we bless you.
All: By your holy cross you have redeemed the world.

A reading from Mark 15:42-47: Late in the afternoon, since it was the Day of Preparation (that is, Sabbath eve), Joseph of Arimathea, a highly respected member of the Jewish Council, came. He was one who lived expectantly, on the lookout for the kingdom of God. Working up his courage, he went to Pilate and asked for Jesus’ body. Pilate questioned whether he could be dead that soon and called for the captain to verify that he was really dead. Assured by the captain, he gave Joseph the corpse. Having already purchased a linen shroud, Joseph took him down, wrapped him in the shroud, placed him in a tomb that had been cut into the rock, and rolled a large stone across the opening. Mary Magdalene and Mary, mother of Joses, watched the burial.

Let us pray: Merciful God, Help us live lives of compassion and love to those who are suffering. We thank you for the witness of Joseph, who cared tenderly for the broken body of Jesus. May we care for the Body of Christ, your holy church, and its mission to tell the good news of the life, death and resurrection of your Son. In Jesus’ name, Amen

The readings are from The Message. Drawing by Gustave Dore and anonymous. Prayers by Rev. Dr. Jack Horner
Click here to return to the Way of the Cross main page.